Requesting Data from the AGSL

We want to make sure that the GeoData Services at the AGSL remain useful and relevant to you.  Please complete our survey and help us improve our services.  This survey is being performed strictly for improvement of our services to you.  The information is not being used in any research at UWM or elsewhere.  You remain anonymous unless you opt-in at the end of the survey by providing your e-mail.  The survey uses the UWM Qualtrics survey instrument.

Social and demographic data means data about people and societies in which people live, work, and travel.  To find GIS data about people, we think about data in the context of where.  People are born, live, and die somewhere.  Most of us spend money on things or services.  Many of us live in a home that we own or rent.  We communicate with one another, travel to and from locations, and perform countless tasks that make us part of a society.

Every land mass on earth has some sort of governmental administration at various levels such as villages, cities, counties, states/provinces, and countries.  Humans live their lives within these boundaries, even though the boundaries are rarely physical or tangible. 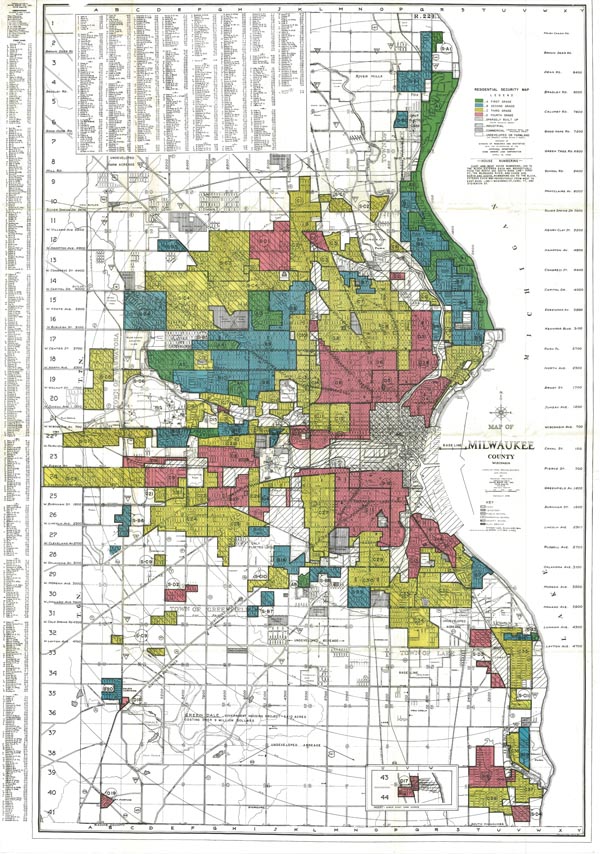 An example of social data: Residential Security map, commonly known as "redlining" for Milwaukee, Wisconsin from 1938.

That's a lot of data!

The human brain's ability to forget is critically important.  If we remembered every piece of information we received through our senses, we would be overwhelmed by irrelevant and unimportant information.  Think of social and demographic data through the lens of this analogy.  We can't possibly know about every action, interaction, inaction or phenomenon affecting everyone, but that's not to say that there isn't an effectively infinite quantity of data.

We get information about these topics by sampling, survey, and experiment.  When working with these types of data, we expect to see data that is interpolated based on social status or class, age, sex, race, ethnic background, family history, etc.  These demographics are important for research on the human condition, past, present, and future.

Data are also often aggregated geographically or temporally.  Temporal aggregation is less obvious than geographic.  Data may be a snapshot in time, capturing a single moment, or it could be collected over a period of time.  Geographic aggregation can be done for convenience, for protecting privacy, or for study design purposes.

The US Census Bureau uses geographic aggregation to make sure that households' answers to questions on census questionnaires remain confidential.  Using standardized geographic areas such as Census Tracts, information from numerous households can be analyzed for spatial and social patterns.

You will find tutorials for using several of the most commonly used repositories of social and demographic data for use in GIS analysis.

Things to consider when using social and demographic data for GIS analysis Part 1:

Although all of these lines are socially constructed and often political, they can have a major impact on human beings.   And even though these lines are rarely representing a physical feature on the surface on the earth, positional accuracy can be critical.  If you're interested in a world map showing nations, a mile or two variation in a border position would be negligible (check out Natural Earth under Cartographic Resources.)  However, if you're negotiating a peace treaty or deciding where to build a wall, knowing exactly where the border is can be important.

Shapes of borders can be confusing too.  Just look at the image below showing a very confusing border between India and Bangladesh (It's in German, but you will get the point.)  In this case, a single polygon could never represent the border of India or Bangladesh.  We would need to use a multi-part polygon for this analysis. 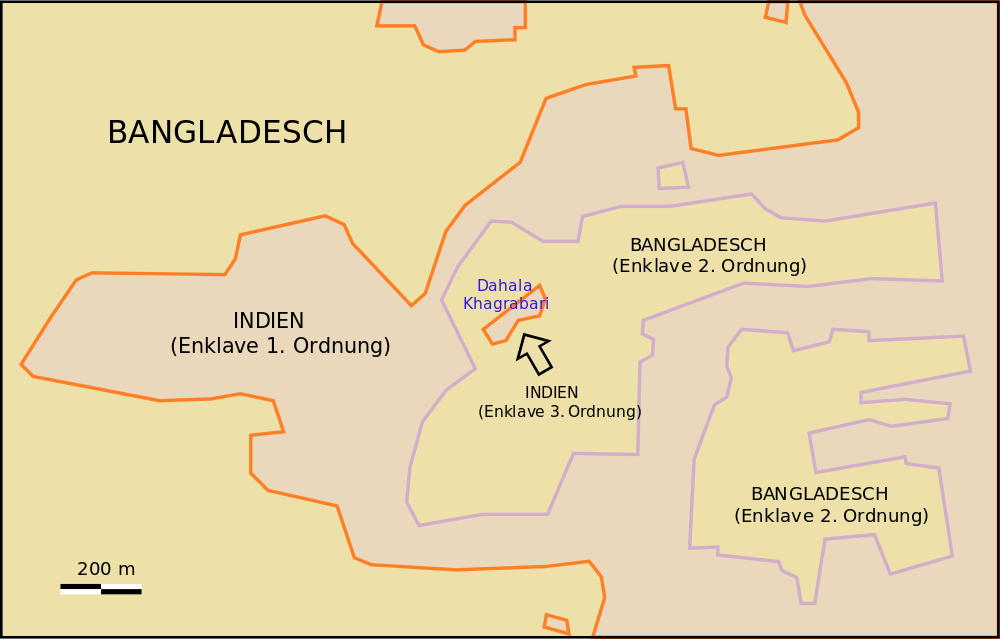 Things to consider when using social and demographic data for GIS analysis Part 2:

The MAUP is a statistical bias that occurs when point-based data (such as household responses to the census) is aggregated into an arbitrary area with nearby data points.  The statistical analysis of aggregated data is influenced by both the shape and scale of the aggregation unit. 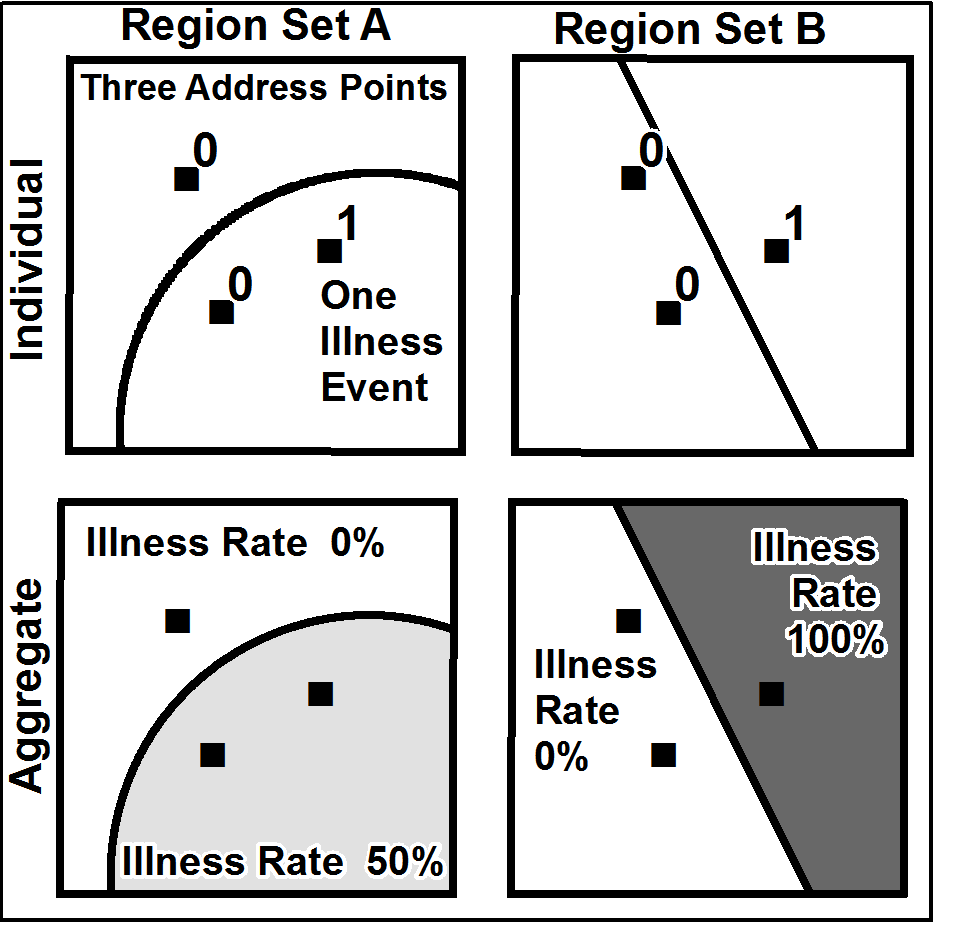 As you can see in the image above, changing how the points are aggregated can influence the results of the analysis (as well as the output of a map visualization.)

The Contents of Finding and Using GIS Data may be reused with attribution for Non-Commercial purposes.

Finding and Using GIS Data by Board of Regents of the University of Wisconsin System is licensed under a Creative Commons Attribution-NonCommercial 3.0 Unported License.