Read about them at http://www.lawrence.edu/library/archives/history.shtml and contact the Lawrence University Archives for more information, or to access student records (transcripts).

Historical records of the Milwaukee-Downer College are available at the UWM Archives Department. Read the finding aid at http://digital.library.wisc.edu/1711.dl/wiarchives.uw-whs-mil0000l or ask in the Archives.

[Note: Milwaukee-Downer College is not officially affiated with UW-Milwaukee, nor was it a predecessor institution.]

Milwaukee-Downer College was created in 1895 by the merger of Milwaukee College and Downer College. Each institution, founded for the education of women, had a distinct history of its own.

Downer College was originally chartered in January 1855 as the Wisconsin Female College in Fox Lake, WI, organized by the Wisconsin Baptist Educational Society. It became incorporated and non-sectarian in 1862. In the late 1870s, due to changing administrations and character of the school, it was sometimes referred to as the Fox Lake College or Fox Lake Academy. After the bequest of Judge Jason Downer, the name was officially changed to Downer College in 1889.

Milwaukee-Downer College merged with Lawrence University in 1964 and the buildings are now part of the University of Wisconsin-Milwaukee campus. 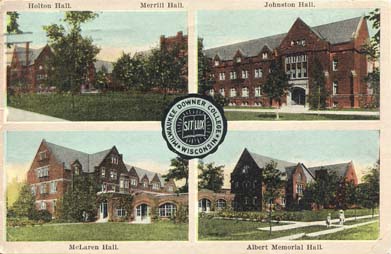 1866 - The name of the school was changed to Milwaukee College

1964 - University of Wisconsin-Milwaukee purchased the campus in 1964, and Milwaukee-Downer moved to Appleton to join Lawrence College (now University)