A comprehensive guide to citing in various citation styles, offering examples of citations as well as links to outside sources.

What is a citation?

A citation or reference is the information given in a bibliography or a database about a particular title, which often includes:

Citations give credit to those whose ideas have contributed to your research and give your readers enough information to locate the sources you used. There are many ways to format citations. The style you choose depends on your field and the requirements set by your professor or publisher.

Chapter in an edited book

In Chicago Author-Date style, citations in the text are appear in parentheses right after the content cited, before the final punctuation of the sentence. In-text citations for books and articles are identical. They include the author's last name and the year of publication. The page number is required if a specific detail, passage, or quote is referenced. More than one source can be cited within the same parentheses, if they support the same sentence.

All sources that are either directly quoted or paraphrased should be cited within your research paper. If you mention the author's name before the direct quote or paraphrase then you do not need to include it in the citation.

OR if you do not mention the author's name before introducing the quote then it would need to appear in the citation.

More than One Author

Chicago Style uses two different systems for citing. This guide focuses on Author-Date system, commonly used in the sciences. For more information on the Notes & Bibliography system used in the humanities, see the "Chicago" tab.

The Reference List in Author-Date style should list all the sources cited in the work. Unlike a bibliography, it should not contain any sources NOT cited in the text. The in-text citations give just enough information to help the reader find the source on the reference list, where the complete citation is located. 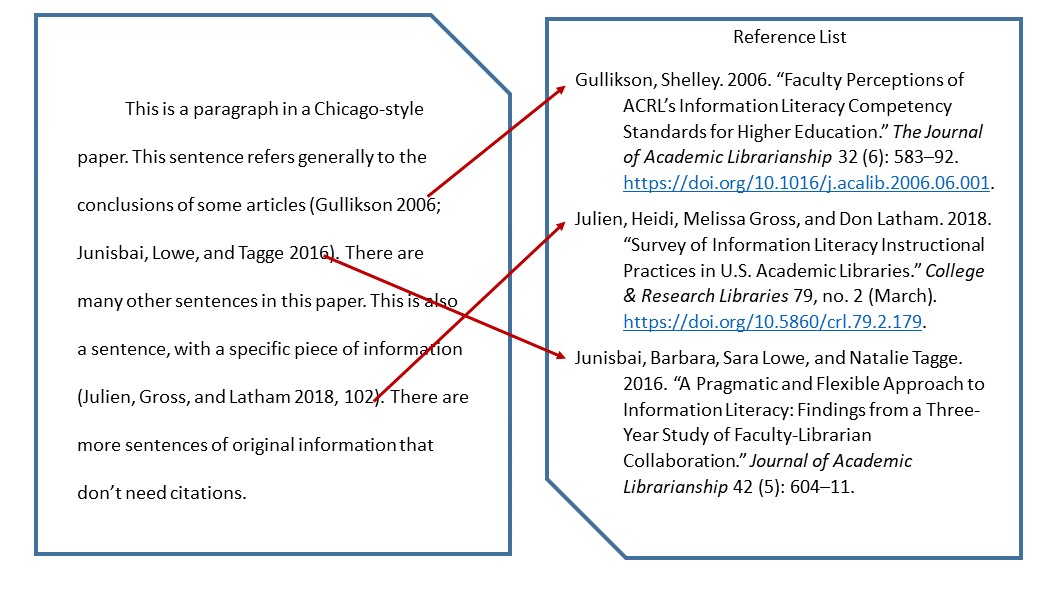