Vietnam War Protests at the University of Wisconsin-Milwaukee - Archives Dept.: The Student Strike and Later Protests, 1970-1972

Overview of protests and rallies held at UWM against the Vietnam conflict during the 1960s and 1970s. Includes photographs and references.

April 30-May 4, 1970: President Richard Nixon announces that U.S. and South Vietnamese forces will attack military
targets in Cambodia. In light of this and the May 4 attack on Kent State University by Ohio National Guardsmen, UWM
groups join others nationwide in calling for a student strike and campus walkout.

May 6, 1970: Over 3,000 protesters, including speakers from Students for a Democratic Society, union leaders, activist
groups, and professors, gather in front of Mitchell Hall for a rally and strike action. From the Mitchell Hall lawn, the crowd
moves to block access to the Union and otherwise disrupt campus activity. Several hundred students occupy the library
and university power plant, leading to their closure.

May 7, 1970: Strike activities continue with a 1,000 person rally, cancellation of numerous classes and programs, and occupation
of additional campus buildings. Chancellor Klotsche declares a state of emergency on the UWM campus, effectively making it
illegal for individuals not affiliated with the university to be on campus.

May 8, 1970: The Union Policy Board requests that the Union be closed, on grounds that "the strikers had demoralized the
staff, that it was no longer possible to guarantee safety in the builidng, and that certain activities were being carried on in
the building that were intolerable." The building would not be reopened until May 11.

May 11, 1970: The strike continues as protesters destroy a Mitchell Hall computer and 40 strikers occupy and break
windows. The Library is again closed as a number of departments, notably the School of Education and the College of
Letters and Sciences either announce their support for the strikers or indicate that striking students will not be punished for
their participation.

May 12, 1970: Chancellor Klotsche calls for a "Day of Assessment" to discuss the issues dividing the nation with
poresters and other interested individuals. Five hundred strikers meet in the Union ballroom to "rap" about the strike, but are
cleared out of the building with the assistance of Milwaukee Police tactical squads. Despite this conflict, Klotsche later writes,
"The effect of this Day of Assessment is hard to determine, but it clearly assisted in defusing the tensions that had embroiled
the campus for almost a week."

May 18, 1970: The state of emergency is lifted as the strike is declared dead by an organizer. Teaching Assistant John
Cummins indicates in the UWM Post that the strike "destroyed the myth that students could not be mobilized around
political issues at the University."

October 15-21, 1970: Four faculty members involved in the strike are tried before a UW System faculty counsel for
dismissal for disruptive behavior. The decision provokes student outcry and walkouts, including a 400-person rally in
support of the faculty members. The charges against James Cockcroft are dropped for lack of evidence, but Barbara
Gibson, Morgan Gibson, and Arnold Kaufman are found guilty and formally reprimanded.

February 11, 1971: One hundred fifty protesters block access to Bolton Hall and invade Chapman Hall in an attempt to
present their demands to Chancellor Klotsche regarding President Nixon's invasion of Laos. Thirty-five protesters throw
snowballs at police and Chapman office personnel, but there are no serious injuries.

May 5, 1971: Vietnam Veterans Against the War give "war crime" testimony on the Mitchell Hall lawn before leading a march of approximately 1,000 protesters to downtown Milwaukee. Despite violence downtown, UWM itself is subdued, with one wag observing, "it looks like there'll be more marshals than protesters."

October 4, 1971: A crowd of 300 meets in front of Mitchell Hall for a march on the Milwaukee War Memorial, but again
the ground is subdued. Roger Bybee, a coordinator of the rally, notes that no more rallies are planned for the immediate
future.

May 1, 1972: Members of the Wisconsin Veterans Union read poems from their collection "Winning Hearts and Minds" as
they plant a tree in front of Mitchell Hall in honor of the Vietnam dead. Another "moratorium event" is scheduled two days
later but attracts only 300 marchers.

November 21, 1972: A combination Vietnam War/Student Union control moratorium attracts no more than 30 protesters
and is described by the UWM Post as "fizzled out for absence of quorum." 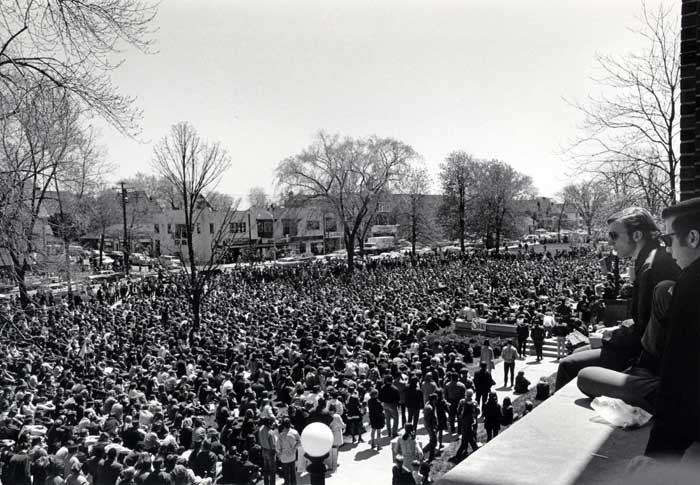 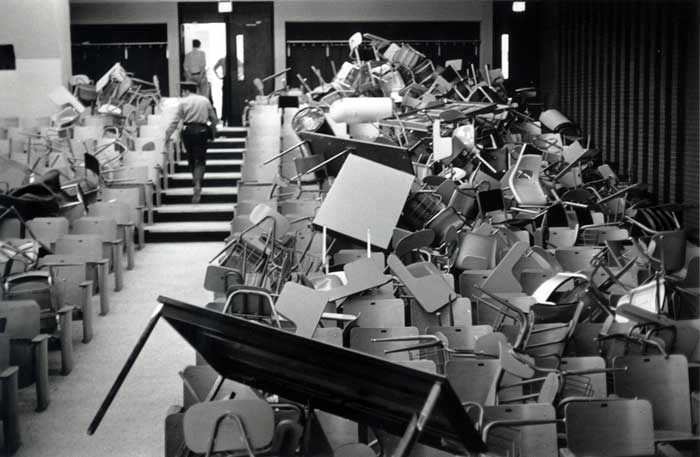 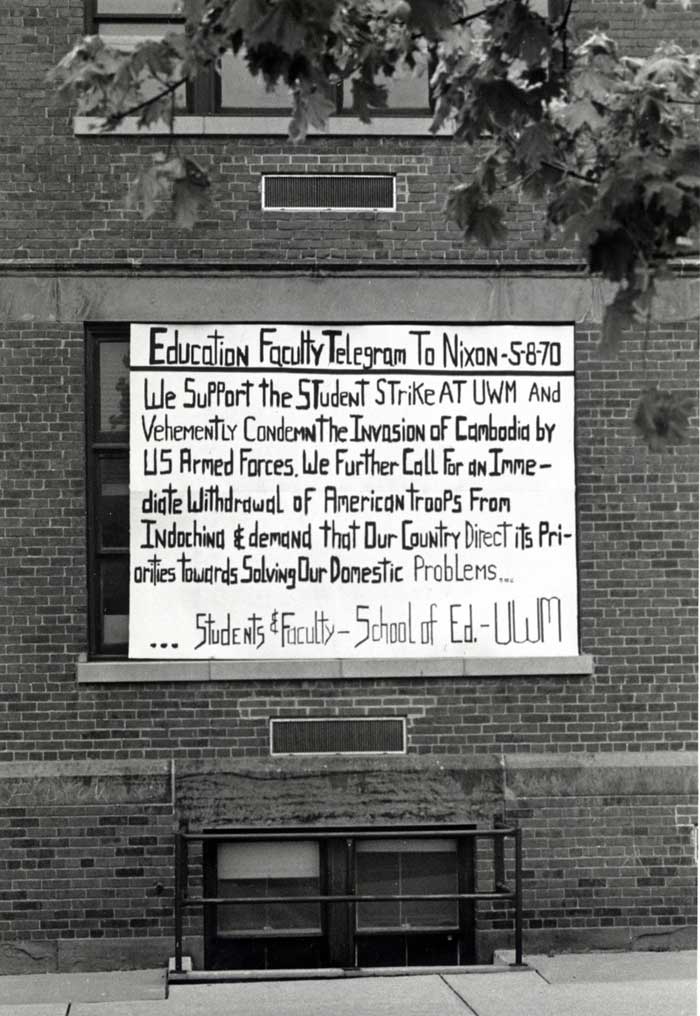